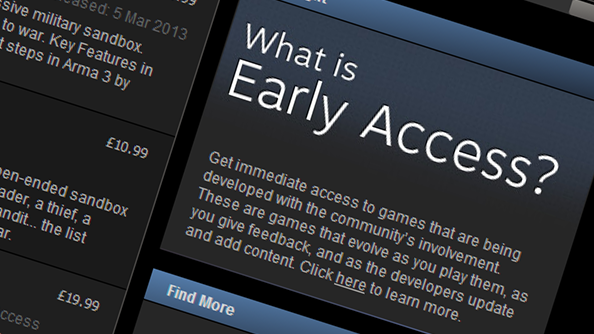 There has been a rising trend in the game industry in the last couple years or so. That trend is releasing games that are in “alpha”, “beta”, or “early access” states. For those of you who aren’t familiar with these terms, “alpha” is the term for a game that’s really early in development. Usually the core gameplay is there without a lot of the aesthetics. “Beta” is usually defined as “the game is complete, but has not gone through all testing scenarios yet”. “Early Access” doesn’t follow either of these definitions. “Early Access” is just defined as “access to a game before the official launch date.” Now, these aren’t necessarily “official” definitions of these terms. These are my understandings of them on a general level. Unfortunately, developers can define these states as whatever they want. There are both perks and detriments of releasing a game in any of these states.

There are a number of good things that come out of releasing a game early. One of the big things is to get a taste of a new game before it comes out. This can be very beneficial, or detrimental, for a game that has a completely new idea. For example, a game like Evolve is in development. This game’s basic gameplay is 4 people are trying to take down a single monster before the monster completes its objectives. There aren’t many games that have this imbalanced version of multiplayer where it’s 1 vs 4. So, releasing a game in an “alpha” or “beta” state can give people a taste of what the game is supposed to play like and hopefully help increase pre-orders or general sales when the game is released. Another perk is that users who are involved with an alpha or beta build of a game are encouraged to report any bugs they encounter and provide additional feedback to the developers to help make the game better. Unfortunately, a number of people who get into these programs don’t usually report anything. If they come across a bug or something they don’t like, they just quit and usually don’t come back instead of providing helpful feedback to the developers. Lastly, and probably the most useful, is it can help stress test servers and the game itself. With the increase of games that rely on running online, there have been more and more games that have been released, but unplayable on day one, or even the first week, due to servers being overloaded by people trying to download and run the game. Grand Theft Auto V and Diablo III have been big news stories recently with this problem. On release, Diablo III was unplayable and was giving the infamous error of “Error 37: The servers are busy at this time. Please try again later.” Since Diablo III requires a login before you even can play the game, anyone who encountered this error was unable to play the game, regardless on if they wanted to play single player or co-op with some friends. In addition to that, Grand Theft Auto V didn’t even have their “Grand Theft Auto Online” component released when the game was out. I assume that section was either not done, or they were running into issues with connections. However, once Grand Theft Auto Online was released, many people found that they weren’t able to connect. Even some found that trying to connect corrupted their single player progress. As stated in my Grand Theft Auto V review, I luckily avoided the bug that corrupted single player, but it took me nearly 3 weeks to be able to even connect to the online portion. Theoretically, these problems could have been visible and reported on if these games had had a beta release to stress test the servers.

Now, with the good, there are also a number of bad things that can come out of releasing a game in an “unfinished” state. The most notable is that the game isn’t finished. Which means there could easily be game breaking bugs that either will crash the game to desktop, corrupt save files, or just not work altogether. This can leave a very sour taste in some people’s mouths. Another big this is that a lot of people will sign up for an alpha or beta in order to test out the game for themselves before deciding to purchase a game. Sometimes this leads positively and the person will pre-order or purchase the game. Other times, it’s negative and it will put off the user enough to where they decide to not buy it. An example is my experience with the “BIG Alpha” for Evolve. Evolve was a game that I was very interested in since its gameplay mechanic was so unique and nothing I had seen before. So, when the alpha was live, I was lucky enough to get into it. However, after a few hours of playing the alpha, I noticed that there wasn’t much to the game. In those couple hours, I felt like I had played essentially the entirety of what the game was since I couldn’t foresee anything being added to the core mechanic that was on display in the alpha. So, after the alpha had ended, I had no need to go back and play the beta, let alone buy the full game on release. There was a bad habit that was apparent when alphas and betas weren’t necessarily a common thing, and that’s charging for access to a beta. Minecraft was a big contributor to this idea since they were charging $20 to get into their beta, which lasted nearly a year before they had an “official” release. For some reasons listed above, charging for an unfinished game is completely wrong since it puts a wrong idea on what you’re getting. Now, when Minecraft actually had an “official” release, they did raise the price to buy the game. So, if you were a part of the beta, you did get a discounted price, but that’s not necessarily a valid excuse. When someone buys something, they expect it to be completed. For example, what would be the response if I spent $200 on a WiiU “beta”, but the WiiU only played downloaded games, couldn’t read games from the disc. The disc drive is there, and there will be physical copies released, but the “beta” version didn’t work like that. Would you really spend the money on something that’s not finished? Some would. I’m guilty of buying Early Access games, and even Kickstarting games. However, these games are usually from developers that have a history of releasing good games. That’s not to say that I haven’t been burned by some purchases too. Lastly, and this is the most damaging of all, some developers use excuses of completely broken games like “well, it’s in early access”. There have been games that have been pulled from Steam because there’s not a game there. People wanted their money back because they feel like they were conned out of their money by promises and images from the developer. However, at the time, Steam had no way of offering this. However, because of situations like this, Steam has now released an unprecedented way of refunding a digital copy of a game. Now, this is not to say that all developers will use this as an excuse, but the fact that some have, there needs to be a way to combat it as a consumer.

In the end, I think releasing a game in a timed “alpha” or “beta” state can help a game in the long run. Internal testing can only show so many things. It’s only when you get hundreds or thousands of people playing the game can you really test servers and the game itself. “Alphas” and “betas” should also never be released for a price. However, this is becoming a slippery slope of games releasing for full price as “early access” that are barely considered in the “alpha” state by most consumers. There should be an industry-wide definition of what “alpha” and “beta” is, and “early access” shouldn’t be available at all. If a game doesn’t fit the criteria to be released in a “beta” state, it shouldn’t be able to be released as “beta”. The perk is that this trend is also fairly self-policing. Games that release in “early access” that are “not done” or “broken” usually will get glaringly negative reviews by people who have purchased it. This helps for people who look to buy it weeks later, but not for the people who buy it quickly. Unfortunately, they’re stuck with the game. However, in recent history, there have been some developers (and Steam even) who have offered refunds for games that have been released in completely broken states.