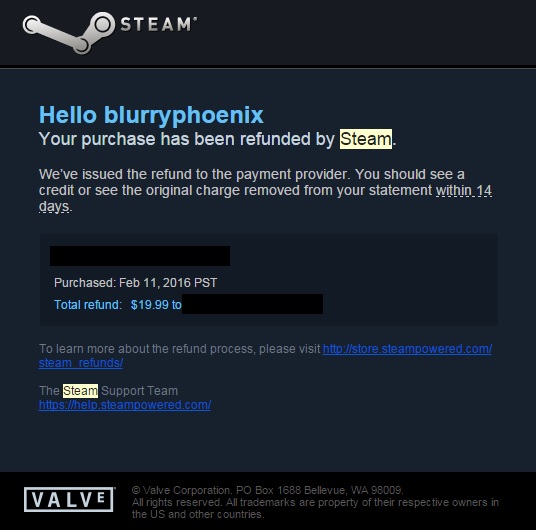 Ok, right off the bat, here are my initial qualifications to give you an upfront idea of my way of thinking.  I’ll expand on it later in the article.  “Have I ever refunded a game on Steam before?”  Yes.  “Have you ever worked with a game developer?”  Yes.   Now, that being said, here are my opinions on Steam Refunds specifically, but this article is more of a commentary on game refunds in general.  Also, full disclosure, this is being written immediately after reading a single article on Polygon with them reporting on a number of people wanting to refund Firewatch because it’s “too short.”  So, the article may be a little more heated than normal, but I wanted to get this written before the opinions and examples I have were forgotten.

So, to answer the first question I addressed at the top of the article.  Yes, I have submitted and received a Steam refund.  The situation was that I had purchased The Following DLC (DownLoadable Content) for Dying Light.  Prior to purchasing the DLC, I didn’t check to see if I had already received the DLC when Dying Light released a patch.  Which, after reading some articles on the patch, it seemed like I’d get the DLC for free.  So, after reading the articles, I immediately requested a refund stating “I purchased the DLC not checking if I already owned it prior to purchasing.”  Steam very promptly granted the refund, and I was good to go.  Unfortunately, when I did get home and checked my computer, I didn’t have the DLC.  So, I ended up buying it again.

Secondly, yes, I worked for a game developer for 4 years.  It’s no secret that I’ve made posts talking about games that are in development from Interceptor Entertainment.  That’s also been a reason why I haven’t reviewed either of their games, Bombshell and Rise of the Triad.  I have a major conflict of interest.  Now, did the sales of the first game, Rise of the Triad, have any direct impact on me?  Technically yes.  Let’s say Rise of the Triad didn’t sell well, or people took advantage of the, then nonexistent, refund policy on Steam.  There’s no guarantee Bombshell would have ever been created, and I would have been out of a job.  But no, there was no direct monetary value that was given to me based on how well or poorly the game sold.  I was paid a salary just like the rest of the devs.

Now that those disclosures are out of the way, let me actually dive deeper into the whole point of the article, Steam refunds and game refunds in general.  The Polygon article that I linked to in the first paragraph is based around people wanting to get refunds on Firewatch because the game experience was 2-3 hours long.  So, let’s talk about that situation specifically.  Before I get into my opinions on this, let’s discuss the facts first.  As of now, Feb. 17th 2016, Firewatch is selling for $20 on Steam.  It was the debut game from a new developer, Campo Santo, and co-published by them as well.  HowLongToBeat, a website that users can submit how long to beat a game, has the competition time listed at 4 hours.  Now, let’s discuss the criteria for requesting a Steam refund.  The refund has to be requested within 14 days of purchase.  The refunded game must have less than 2 hours of play time recorded.  Now to the more opinionated part.  People are stating that they’re able to beat Firewatch in around 2 hours.  I’m inclined to not question that since HowLongToBeat could be skewed to people taking more time exploring.  So, since people are beating the game around the 2 hour mark, some people are trying to get refunds based solely on that.  The Steam forum post that is listed in the Polygon article states “[…] So this game was 18$. I purchased it because i enjoyed games like this. And I enjoyed this game. Alot. Like, way more than a healthy amount. But it was 2-3 hours. I feel like there could of been more, and im thinking of refunding. But here is my problem: I loved this game. It was a unique game with awesome narration and storytelling. I like the developers. I mean seriously, have you seen how active they are on theese forums? What other dev is that connected to their community? I want to support the developers, but there was so much more i could of got with my 18$. Should i refund, or hold on to it?”  Now, to both the developers and this poster’s credit, the poster decided to keep the game after talking with the developers.  The main issue I have with the initial post is this notion that even though you really enjoyed the game, you like the developers, but it was short, you want your $18 back?  Hypothetically, let’s say this person is an early teenager.  This person’s parents no longer pay for any “fun things” in his life, so this person has a minimum wage part-time job.  This, hypothetical, person can’t exactly afford to waste any money.  Should this person have then spent $18 on a game to begin with?  Did this person do any research on the game prior to purchasing it apart from “I enjoyed games like this”?  If so, you’d probably notice that it’s a fairly short narrative and fairly quick to finish.  Now back to this specific post.  This poster states “And I enjoyed this game.  Alot.  Like, way more than a healthy amount.”  The poster’s only complaint is that it’s 2-3 hours long.  Situations like this, you have to value a purchase subjectively.  If the game was boring but was 70 hours long, is it therefore worth more than a really fun game that’s 2 hours long?  Absolutely not.  Price points can have a good representation of what the game consists of.  If you spend a normal $60 on a game, you expect good graphics, around 10-15 hours, and good gameplay with minimal bugs.  However, Firewatch is listed at $20.  Which gives me the idea that it’s an independent developer that is either very retro looking but around the 8 hour length, or a very good looking game that’s closer to the 4-5 hour mark.  By seeing screenshots and video of the gameplay, I can assume that Firewatch is more towards the latter.

Ok, now that I’ve listed all the things that I find wrong with the subject of the article and given numerous hypothetical situations, what does that actually mean?  It means that I’m glad that the Steam refund policy is in place.  It protects the consumer from purchasing games with false advertising or are utterly broken to the point where you can’t play the game.  Before, there wasn’t a way to refund a digitally purchased game at all.  If you made a mistake in purchasing something, you were stuck with it.  No excuses.  However, this also leaves it open for being abused.  Which, I believe is being done here.  It’s been compared in numerous places to watching a movie.  If you watch a movie and enjoy it, do you try to rush out to the box office to try and get a refund before the credits stop rolling?  The movie theater you’re at will just laugh in your face and deny you a refund saying that you watched through the entire movie.  Whether you enjoyed it or not, you paid to watch the movie, and you did exactly that.  Another comparison I thought of was, you go to a restaurant, McDonald’s for the ease of the example.  You order a Big Mac meal.  You finish it, but not only that, you enjoyed it.  But then, you go back to the counter and ask for a refund because that meal didn’t fill you up.  You wanted more food for the price you paid.  Does that make any sense?  Absolutely not.  But, that’s how a number of people are thinking, especially in this situation.  It needs to stop.  Yes, your money is worth a lot to you.  But, if you consume anything, you expect to pay for it in order for the other people that prepared it to keep their jobs.  Game developers, actors, cooks are all people too.  If you keep thinking that you want to get everything for free, then what’s that going to do to these actual people who provide you with these products?  If you have a job, the “actual people” I listed is you.  Let that sink in a bit.