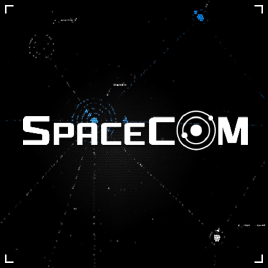 The folks at Flow Combine and Evolve PR were nice enough to give me an advanced copy of Spacecom to preview. Keep in mind, since this is going to be a preview, this may not be the final product that you’re seeing. In addition to that, I will not be giving a review score.

I have been given the pleasure to receive a preview code for Spacecom. Since this is a preview of Spacecom, I will not be giving it a review score as it’s not the final build, but I’ll be giving you my impressions of it.

Spacecom is a space strategy game. It is played with only the mouse, no keyboard. This is probably because Spacecom is also going to be released on Android and iOS devices.
The graphics of Spacecom are very simple. However, that’s not saying it’s bad either. For the style of game that Spacecom is, it works very well.

Spacecom is a game that’s very easy to pick up and learn. It has one of the easiest learning curves that I’ve experienced in recent games. This works very well in order to get more people to play the game. Not to mention the fact that since it’s on Android and iOS devices, controls need to be very limited. Spacecom has its tense moments, but you never feel rushed to make a decision like in traditional Real Time Strategy Games. I think Marek Ziemak, Senior Producer for 11 Bit Launchpad, said it best “In Spacecom, coincidence, luck, fast clicking won’t get you far. The game is all about planning. It’s all about strategic thinking.” Spacecom also has a cool function that I didn’t discover until later. Spacecom gives you the ability to change the speed of the game. In the upper right hand corner, there are buttons to adjust the speed between Normal, Double, and Triple speed. I love this functionality, because as I was playing a majority of the game, I was thinking that the movement was just a bit too slow for my liking.

The story of Spacecom doesn’t really matter. I see the dialog boxes as a way to get your objectives. Even if you decide to skip the dialog boxes completely, your objectives are on the screen for the entire level. After playing a number of the story missions, I hopped into the Multiplayer section of Spacecom. Unfortunately, at the time of writing this preview, no servers were online. So, because of this, I hopped into the Skirmish section to play against some bots to at least get the feeling of playing against someone to defeat them instead of just completing objectives. I played against the middle difficulty, “Story Leson”. Unfortunately, even the middle difficulty was fairly simple. That difficulty was very defensive. There were a number of opportunities that it could have taken me out as I was still getting used to how the game played, but the bot didn’t make any moves until I made my own moves to counter them.

All in all, I had a lot of fun playing Spacecom. I’m definitely going to continue to put some more time into it. At the moment, the price is TBA. However, you can expect Spacecom to be available on PC, Mac, Linux, iOS, and Android in the second half of 2014.

I’m Blurryphoenix, and game on!