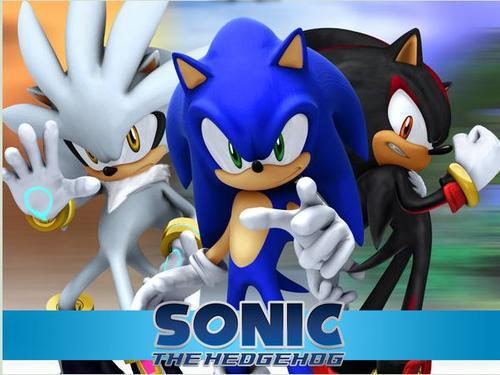 In honor of “Review a Bad Game” Day, I have picked the worst game that I can think of in the recent years, Sonic the Hedgehog aka Sonic ’06. This is done as a written review since I’m going to be moving in a couple weeks (I’m writing this in mid July). So to hit the August 8th deadline, “Review a Bad Game” day, I figured a written review would work just fine. It’s not a secret that the Sonic the Hedgehog games are my absolute favorite games, so it pains me to review a game that I had such high hopes for… I will be using a number of clips from the YouTube Channel “GameGrumps” as they tested their sanity by attempting to beat this game. Sadly, as of today, they have yet to defeat it, even after 108 parts. One could question if they still have their sanity…

NOTE: All the videos do have profanity in them, so if you’re watching at work, I’d recommend headphones.

First of all, Sonic ’06 could have been much worse, although the game has become mostly unplayable. For instance, the cutscenes in Sonic ’06 are gorgeous, especially for a game that was released in 2006! It is also really cool how you can play 3 different stories as Sonic, Shadow, and Silver (who was introduced in Sonic ’06). However, those may be the only redeeming qualities of Sonic ’06. The reasons why this game is so bad are almost all painfully obvious within the first 10 minutes of the game…

I’m just going to touch on the things that you saw in the previous clip for why I consider this game one of the worst of all time. The first cutscene that you see doesn’t even hint towards a Sonic the Hedgehog game until almost 2 1/2 minutes into the cutscene. Secondly, Dr. Eggman is way too realistic looking. The whole point to Robotnik and Eggman is that they’re supposed to look silly. Eggman is supposed to look completely disproportionate. I understand what they were trying to do with the cutscenes by making all the characters look realistic since they wanted to show off some of the capabilities of the consoles, but they went a little too realistic to the point where they hit the “uncanny valley“. Third, when the gameplay actually starts up, the graphics are glaringly sub-par (even for 2006). They made the cutscenes so amazing looking, that when the gameplay picks up, it’s startling to see the huge difference in quality. Fourth, the loading screens are atrocious, especially on the Playstation 3. I’m aware that Sony consoles have always been known for slower loading times, but this just gets to be ridiculous. Not to mention Sonic ’06 CONSTANTLY loads. For instance, you walk up to a guy and hit talk, *LOADING*, guy explains side-mission, *LOADING*, you do side-mission, *LOADING*, guy congratulates you or reprimands you for failing, *LOADING*, then you’re FINALLY back in the game. Pokecapn from tvtropes.org calculated the total loading times to beat Sonic ’06. The result was 539 loading screens for a total of OVER 2 HOURS of the game which averaged out to be one loading screen every 2:15 of gameplay!! Which can also translate to nearly 12% of the game!! That’s just wrong! Fifth, the controls are almost too stiff to the point where you aren’t even able to control Sonic when he starts getting up to speed, even in the hub world where you’re not even really going that fast. Sixth, Sonic ’06 doesn’t explain anything. Immediately when you get dropped into the game, you have no given objective. Granted, having a game point you where you need to go isn’t always fun either, but having almost NO direction is also annoying. Seventh, when you fall out of a level (shown in the previous video by falling into the water), there’s no splash. It literally just looks like you fell through a static material that looks like an ocean. Again, I realize this was early in the Xbox 360 and Playstation 3 cycles, but I’ve played games on my GameBoy that have at least a splash animation!! Ok, that was just the first 10 minutes of the game… It couldn’t possibly get any worse, could it? Unfortunately, yes it can…

This game is full of glitches. I’ll let the following videos speak for themselves. Here are some examples from episodes of GameGrumps:

So, as you can see, Sonic ’06 can be infuriating to play. I don’t know if I need to add anything more…

I’m BlurryPhoenix, and until the next review, I leave you with some amazing music from Egoraptor from GameGrumps that happened to come from Sonic ’06.