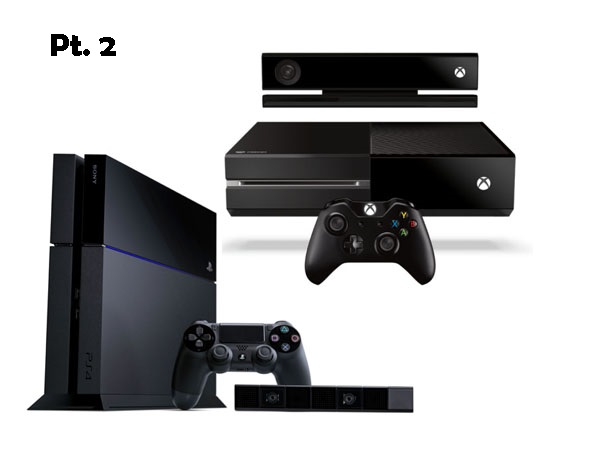 Let me first start off the next generation discussion with the cluster****s that were the console reveals and E3 press conferences. The Sony Playstation 4 reveal consisted of showing a lot of games, the controller, and some of the features that were going to be added to the console itself. However, they didn’t show the console. This was met with a lot of questions on whether or not the PS4 was done or what it even looked like. Xbox tried to capitalize on the questions that people were asking about the PS4 by immediately revealing the Xbox One. However, after all was said and done with the Xbox One reveal, a lot of the gaming community looked more favorably on the PS4 even though they hadn’t seen the console. That was because the Xbox One reveal focused more on the features that were going to be added. However, despite Microsoft’s enthusiasm, the gaming community didn’t care that their Xbox could watch TV and connect with fantasy sports. It was so ridiculous that the following video was created!

Going into E3, a lot of gamers looked more favorably on Sony, even though they had yet to show the console. Microsoft started off E3 by showing a ton of games. This was one of the best moves they could have made since they heard all the complaints about the reveal not showing any games. For the most part, people really enjoyed the press conference until they announced the price of the Xbox One, $499.99. A ton of people got very angry at Microsoft for having such an expensive console. The Playstation 3 was originally released for the same price, and it was met with low sales since it was so expensive. Then after the press conference, there

were still a lot of questions about the “always on” rumor that was floating around, so Microsoft released a press statement that confirmed that you will need to at least have an internet connection once every 24 hours and you wouldn’t be able to play your game, single player or multiplayer, if that wasn’t met. Almost everyone was furious at Microsoft for forcing an internet connection. Even though it didn’t affect me since I have a good internet connection that’s pretty reliable, I can see why it was a big issue. Needless to say, people were very hot-headed going into the Sony press conference. Sony did what they promised to do and showed off the console, some additional features that had yet to be shown, more games, and then they made a number of not-so-subtle jabs at Microsoft to capitalize on the emotion that a number of gamers were feeling. Finally, they announced the price point of the PS4, $399.99, $100 less than the Xbox One. They didn’t mention a number of things that were shown in a graphic, like you’ll have to pay for Playstation Plus to play multiplayer on PS4. So, even with a couple negative things, most people walked away from the Sony press conference quite happy with what they saw.

One of the major issues that people really latched onto from E3 was the “always on” feature of the Xbox One. This allowed users to install their disc based game onto their console so they wouldn’t have to swap discs if they wanted to switch games. This was a pretty awesome feature, along with being able to share your game with 10 other “family members”, which they didn’t go much into detail about. I find it a little bit funny that a lot of people got so bent out of shape because of this feature, but I can also see why at the same time. I can see why people would get upset if they weren’t able to play their physical copy of a game that they paid money for if they didn’t have an internet connection. However, digitally downloaded games have issues like this as well. Granted, Steam on the PC has an offline mode where you can still play single player games while you’re offline. I think the Xbox One is trying to force their way into a market that just isn’t quite there yet. Most console gamers haven’t adopted a digital way of gaming. If I were to have planned out the Xbox One would be to either go full digital and have no disc slot, or to have a more functional combination. That combination would be if you have a physical disc, you’re able to play offline, but the disc needs to be in the tray. Otherwise, if you want to experience the new features that the Xbox One provided, you would then need to be connected to the internet and be logged into your Xbox Live account. This would allow for people to start to adopt the idea of digitally distributed games but still allow other gamers to play how they’re familiar with. I don’t think many of the people were upset at the change, but more at how many features Xbox was taking away while keeping the inconveniences of current consoles.

Post E3 was where a lot of the fun happened. Sadly, it all involved Microsoft and the Xbox One. Microsoft was facing the backlash of what “betraying” the gaming community feels like. Many people had said that they were planning on pre-ordering the Xbox One decided not to. Even people who had pre-ordered the Xbox One decided to cancel the pre-order. I can only imagine what the numbers looked like after all was said and done. Microsoft really must have felt a squeeze on their sales because a week or so after E3, they released this press statement saying that the “always on” functionality was going to be removed, so people will be able to play their games without an internet connection like they currently can. Even though this was one of the best things that Microsoft’s PR could do, I think more people will remember this…

According to VGChartz, as of June 15th, the PS4 was leading the Xbox One in pre-orders by almost double. The PS4 had 75,000 pre-orders while the Xbox One had 45,000 pre-orders. So, even though all of this controversy, the next generation of consoles are breaking records for pre-orders. According to Now Gamer, Amazon had their record of pre-orders per minute. Amazon was selling pre-orders for the PS4 and Xbox One at 2,500 consoles per minute. Amazon had also added that this was a 4,000% increase compared to other consoles during past E3s. Granted, the last time a new generation of consoles that were announced were nearly 7 years ago. Online shopping wasn’t as big of a thing back then.

So, now to the point of the whole article. Where do I think console gaming is heading? I believe that console gaming is slowly dying. Even though there were record number pre-orders for the next generation of consoles, many friends of mine have said that they were going to switch to PC gaming because of what’s going on in the new consoles. I’d love for console developers to stop trying to make a game console everything but a game console! The Xbox One seemed more focused on their TV and sports integration and in previous E3s, the Xbox 360 seemed much more focused on the Kinect. Most console gamers that I know don’t have a Kinect due to how expensive it is, not to mention how frustrating it is to try and play a game with the Kinect. I’ve tried playing with it and the best games I’ve played were Dance Central and other workout games. The PS4 seems more gamer driven, but even that has some issues. Personally, as much as I love playing games in my living room relaxing on the couch, neither of these consoles peak my interest at all. I think more people are joining the “PC Master Race”, as PC gamers call it, this generation. Many gamers feel betrayed by Sony and Microsoft. When the biggest announcement was that Sony wasn’t changing anything in terms of how their games were played, then you know someone screwed up. Clip from E3 below.

In the end, neither console company has given me a reason to buy a new console. All of the games that I want that have been announced are also coming out on this current generation or to PC. So, I’ll save my $400+ and upgrade my PC.